We hope you can join us on Friday, September 4, 2020, for our 28 year anniversary! Live music from Lake Side City begins at 7 pm.

The bar and Banquet Room are still a part of the original structure built on this site in 1889. The bar is original and was hand-carved by the Chicago Bar Company. The building was originally at the street level. There were swinging doors leading out onto a dirt road with hitching posts for horses (Irving Park Road). The silent movie cowboy Tom Mix made a few of his movies here around 1900. They would use the Des Plaines River as the Rio Grande and our bar for saloon scenes. In the 1920s, Al Capone sold the place booze and was spotted at the bar doing business with local gangsters. Witnesses say there were men seated on either side of him with shotguns watching the door. Before its current use, the banquet room was home to a general store, milk depot, post office, gas station, barbershop, pool hall, and restaurant. The Irving Park Viaduct was dug in 1926 and our entrance was moved to the east side of the building. The main dining room and kitchen were added in the 1980s to expand the restaurant business. The Great Escape took over in 1992 and has been preserving, maintaining, and improving the property ever since. We hope you agree!

The Great Escape took over in 1992 and has been preserving, maintaining, and improving the property ever since. In 2007, in an effort to be a leader in the use of clean energy, The Great Escape has constructed a 108kw wind turbine on our property. The turbine produces over 100% of the electric power needed to operate the business. Any excess power the turbine produces goes out to the ComEd grid to supplement the power needs of the surrounding community with clean energy. 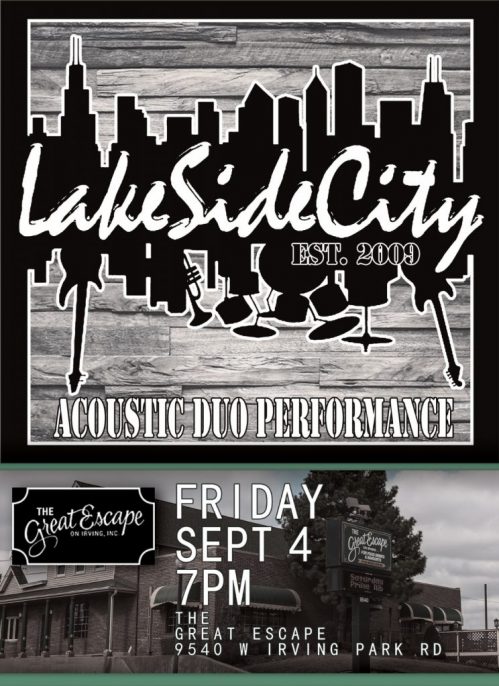